Update about my company

Its been a while since I blogged about the development of my company Userlike that I co-founded in 2011. Last update was 2 years ago

As you might expect running a company needs a lot of time and energy. So my left free time is mostly reserved for my family and social activities. You could say that free time for my hobbies became a rare thing. The last couple of years I saw a definite shift that I tend to spent more time on not computer related stuff during my free time. Lately I spent more time playing the guitar, re-booting an old hobby of mine. Actually this one involved also a bit computer work, since I figured I need to build my own Midi Controller for my amp modelling software.

Between Christmas and New Years I went on a vaction where I got some unexpected free afternoons on my hand, and I felt the itch to look into my old console projects I had been working. I re-booted some old PSP code, for which I used to development a couple of projects. I started writing an amiga style intro. I re-used some old Future Composer player routine that I ported ages ago to the PSP. Revisiting PSP development, brought some nice changes.You can run your toolchain in a docker image, which makes cross development easier.

Getting back to initial topic of this blog post. A big step for the company’s development was our move into a new office space. We grew out the old 120 square meter office space. The last couple of month in that space we were using the officw with up to 14 people in 3 rooms. That demanded a lot of discipline and smart approach to our work schedule. But we survived it 🙂 Finally we found a nice office space not to far away from the old office, still very close to the center of cologne. Everything is in 10 minutes walking disctance, eihter to the main station or into the center of the city.
The office is bit over 400 square meetinfs consisting of 5 rooms. Three big open space loft offices, a meeting room, a lounge area and a kitchen. 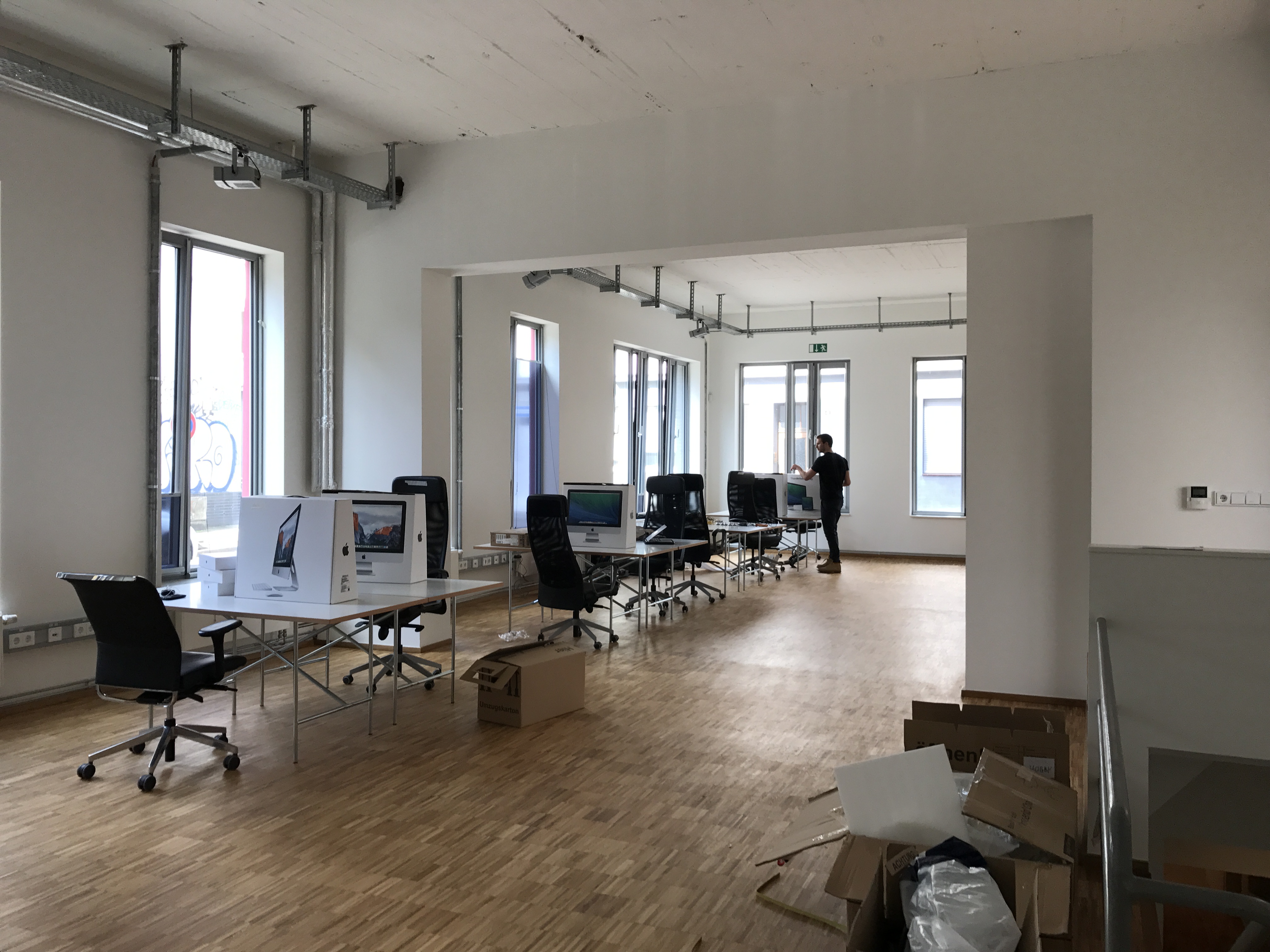 After we moved in and exchanged all our office furniture, we gave our office a new look with the help of Grafit. The office make over was celebrated at our Summer party. And we transitioned to a new style. Next version website from 2017 And right we are in the process of releasing a new website again. Latest version website from 2019 Its been a crazy time developing the company. Our headcount grew from around 15 people working at the old Userlike office to arround 40 people today. My development team grew from a 3 people (including me) to 10 developers. Which also means a shift in my line of work, that I transitioned coding to managing a team. It’s been challeging 2 years for me because we mostly grew the development team to build a new big iteration of our product.

We are changing couple of components in our current stack. First we unify our operator and user facing chat application to one code base using React. Also we are throwing out XMPP as our main message broker, and switching to a custom component, that is part of our new chat server. We switched to Python with
Greenlets and giving up node.js. These steps help us to share code between our apps and also reduce also the distributed state handling between application, since we have less “moving parts” in our stack. Its been a rough start. Because we didn’t realise in the beginning, that most of our problems were related to our internal protocol shortcomings and complex state handling. Once we addressed this by developing a new chat server with a new protocol, things picked up very quickly. Looking forward to release the first iteration of the product. The new production iteration will open us a lot of new usages of our chat application. Despite an new look and improved UX, the biggest conceptional switch for us is to leave the online/offline paradigma of live chat and transition to a sync/async paradigma of a messaging application. This will improve our messenger integrations like Telegram, Facebook and WhatsApp. We had 2 strong years of growing our product and customer base, we have a stronghold in the German market and were able to subscribe a couple of enterprise customer which we could attract with a strong product, professional onboarding services and custom integrations as well as custom tailored solution like chat bot integrations.

Looking forward to a successful 2019.